NCEE and EEUK are delighted to announce the winners of the 2017 National Enterprise Educator Awards, celebrating the UK’s top enterprise and entrepreneurship educators. The award ceremony was held in the stunning venue of Òran Mór, Glasgow during the Gala Dinner for the 12thInternational Entrepreneurship Educators Conference, hosted by Glasgow Caledonian University. 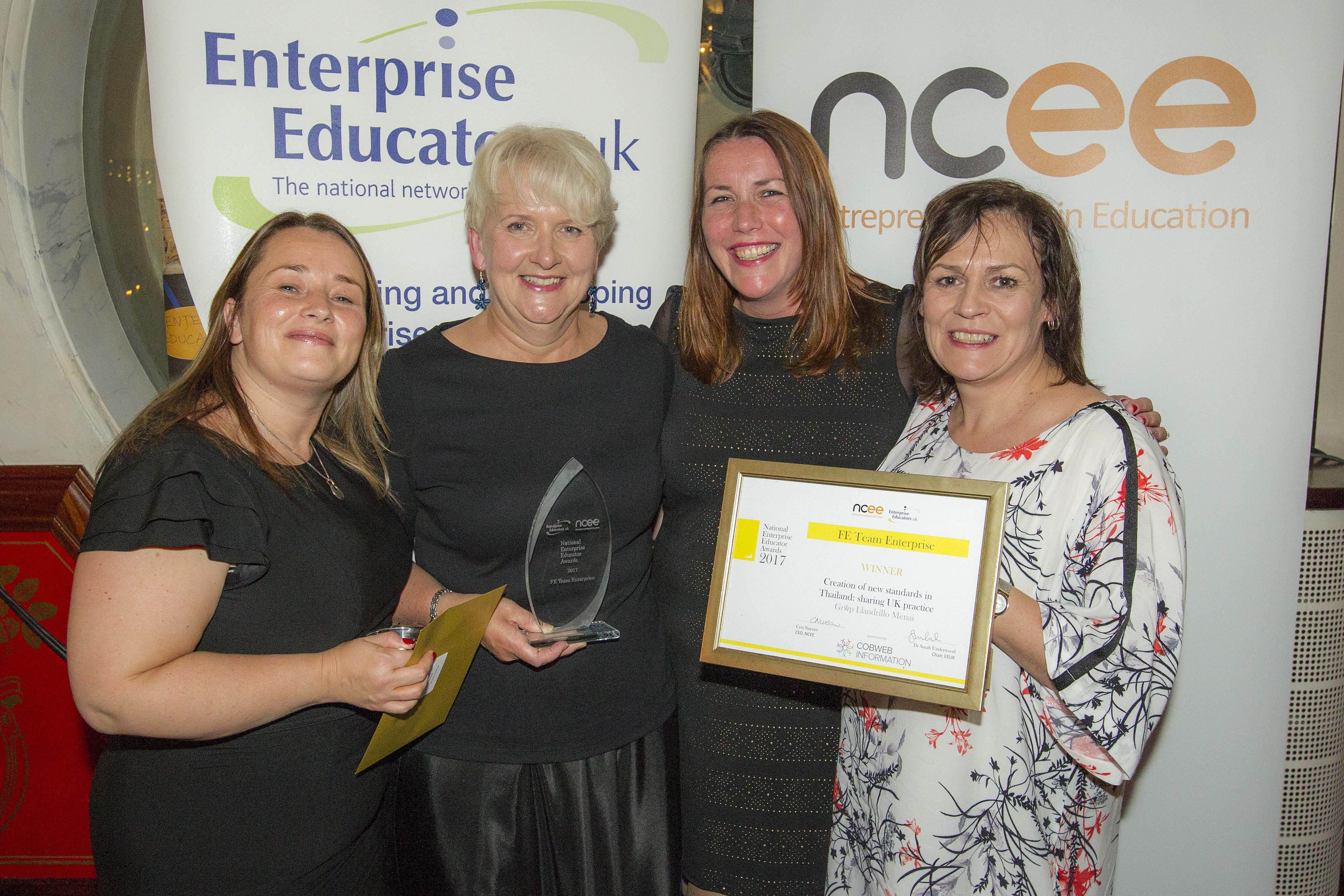 The first award of the evening, the FE Team Enterprise award, sponsored by Cobweb, was presented to Penny Matthews, Christine Evans and Lisa McMullan by Marianne Whitfield of Cobweb (pictured above). Grŵp Llandrillo Menai (GLLM) has developed a new approach and curriculum for student enterprise and entrepreneurship for Vocational Education in Thailand. These are now being piloted following approval by British Council Thailand (BCT) and Thai Ministry of Education’s Office for Vocational Education Commission (OVEC). GLLM, along with South Eastern Regional College (SERC) and Hertfordshire Regional College (HRC), are supporting Thai colleges as they implement the new programme; providing mentoring for educators and building sustainable partnerships between UK and Thai institutions. 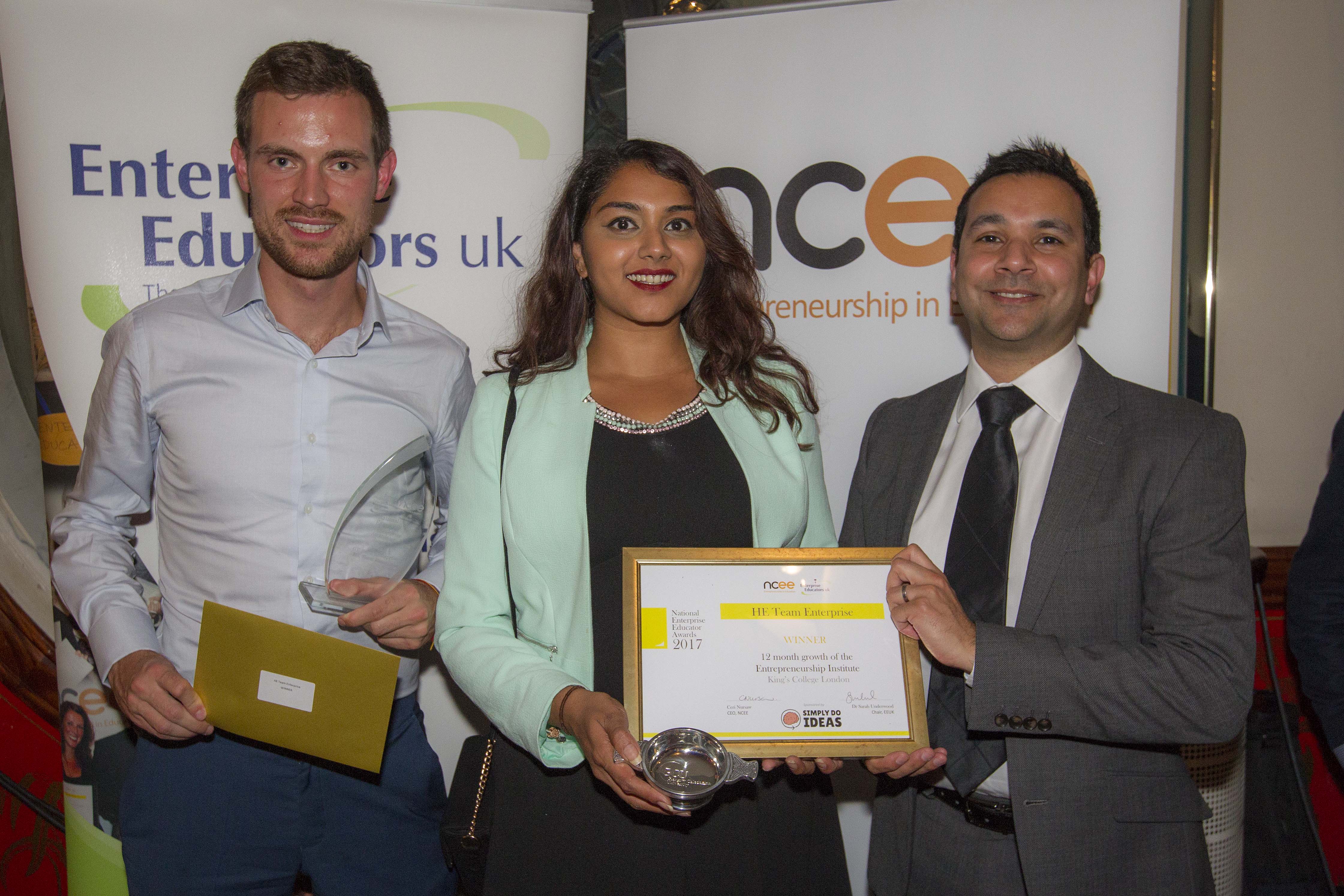 The second winner was the Team from the Entrepreneurship Institute, King’s College London for their entry in the HE Team Enterprise category, sponsored by Simply Do Ideas. Edward Halliday and Hemali Patel are pictured with Lee Sharma, from Simply Do Ideas. The Entrepreneurship Institute, King’s College London has had a four-fold growth and increase in its impact over the last 12 months. It has grown a thriving community of 10,000 students, staff, alumni + supporters whose futures have been enhanced through the Institute’s innovative cocurricular programmes, its commitment to celebrating diversity, harnessing King’s expertise & being student-led. The King’s community have gained new skills and entrepreneurial attributes, and 20 exciting startups have raised investment to the benefit of society.

Highly commended in the HE Team Enterprise category were From the lab to the marketplace – Commercialising Science, University of Birmingham and Venture Matrix 10. Defining, delivering, refining: A decade of embedding enterprise into curriculum and community, Sheffield Hallam University. 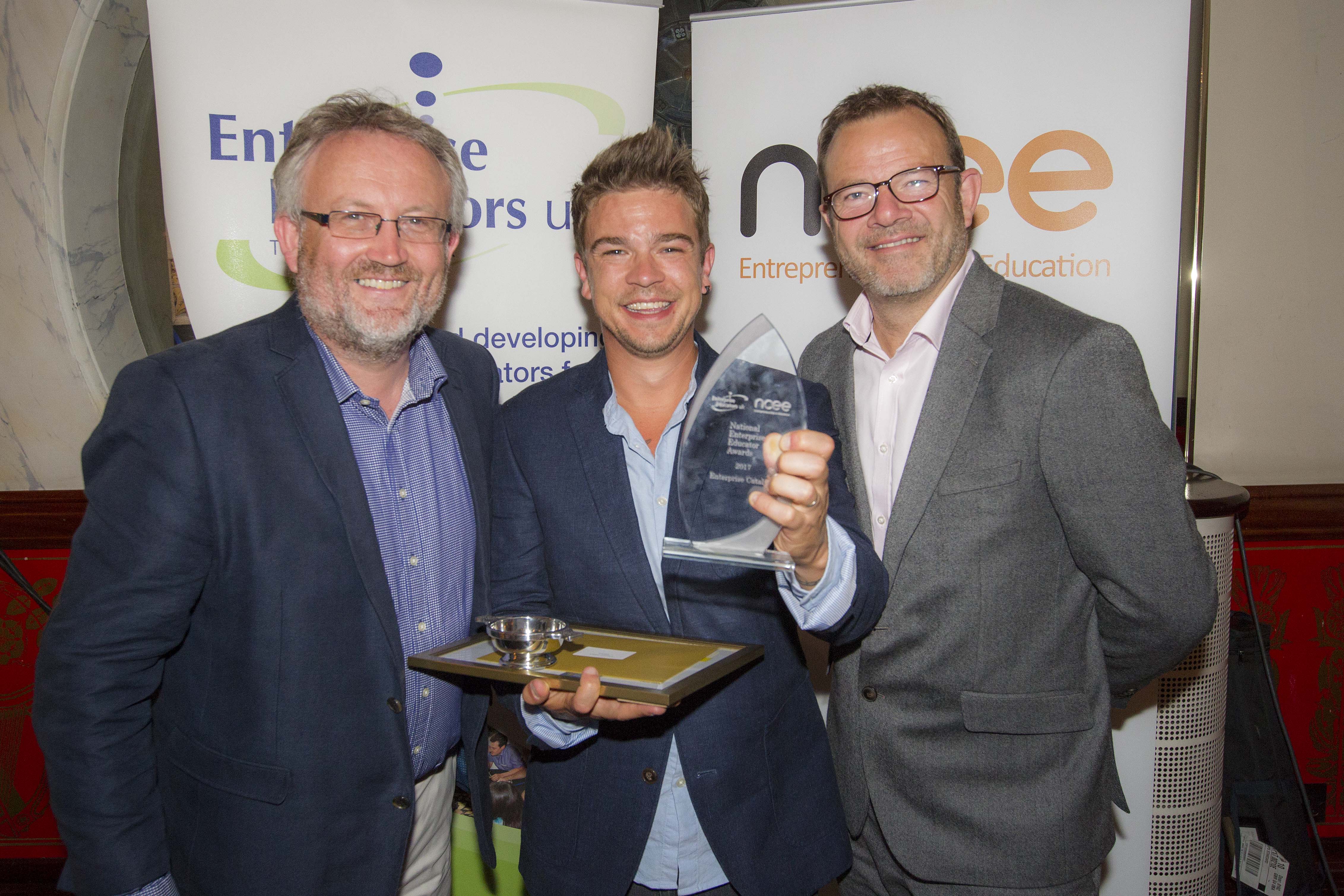 The Enterprise Catalyst category, sponsored by SimVenture Evolution, was won by Michael Warburton of Cambridge Regional College who is pictured with Peter Harrington and Paul Brough Jones of SimVenture. Michael Warburton has acted as a catalyst through innovation in the delivery of Games Development. Having started the Rizing Games company, he has engaged with major games companies, schools, Universities and the local Community. He takes the students to E3 EXPO at LSA, set up a Gaming Hub in the city, visits schools and Colleges and his resources have been published in many sectors and areas in the UK. He is an excellent ambassador for Games Development and for FE.

Highly commended in this category were Graham Baty from Northumbria University and Megan Powell-Vreeswijk from Loughborough University.